If Scotland votes No

We had considered writing an April Fools' story for today but frankly most of the No campaign scare stories are so ridiculous that a hoax in comparison would seem sane.

After a week long referendum in the Veneto region residents have overwhelmingly voted to regain their independence reports The Telegraph. Out of 2.36 million votes cast 2.1 million were in favour of independence or nearly 89%. Veneto roughly equates to the area of the Venetian Republic which was an independent state for more than 1,000 years until it was incorporated into the Austrian Empire and then into the Kingdom of Italy in 1866.

Europe, we will vote!

Come to Brussels on March 30th

People of Scotland - we are not alone.

The Sunday Post is reporting that Henry Christian a life-long Conservative supporter and Yes Scotland campaigner was banned from attending the Tory Party conference in Edinburgh this weekend. Mr. Christian who has been a member of the Tory party for more than 25 years, was a branch vice-chairman in Edinburgh West and had stood for election as a Conservative candidate in the 2012 council elections was due to attend the conference until party bosses heard he supported independence.

In our previous article [not available, email only] took a cheap shot at Labour's Devolution Commission final report by suggesting we would list the major policy announcements and then presenting a blank page. The cheap shot was justified as the report itself is vacuous, filled with ambiguous statements and political double speak. Real positive policies which could improve the lives of Scots are nowhere to be found.

Yesterday's sneak preview of the Yes Scotland billboard was indeed a precursor of the new campaign launch. The following snippets comes from an article by Yes Scotland strategist Stephen Noon.

A real Yes billboard ad' spotted in the wild

For those of us who don't see billboards on a regular basis (that'll be most of the Highlands for a start) we present Lucozade's latest campaign advertisement. Yes Scotland don't have any connection with the campaign (at least that we know about) but they must be delighted.

No to BBC censorship 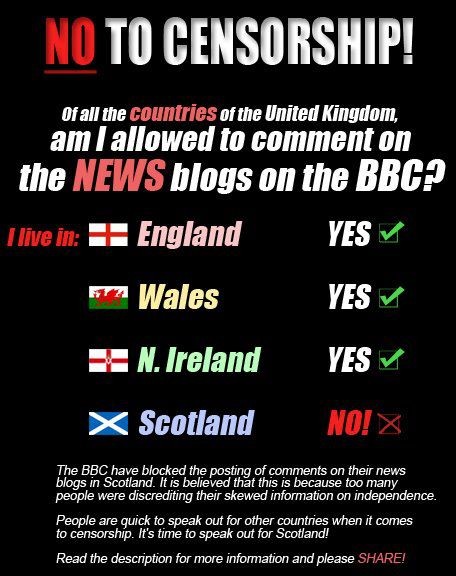