Usefully, the answer 42 also applies to Westminster election results in Scotland. Westminster elections use the First Past The Post (FPTP) system which means that the single candidate with the largest vote wins the constituency. Just one vote more than the nearest rival(s) is enough to win. This can be unfair to parties who get, for instance, a lot of good second places.

When a party's vote share (Scotland wide) is at 42%, or above, interesting things start happening with the number of seats won. In the 2010 General Election, Labour had 42% of the vote and won 41 seats out of 59. The more a party's share of the vote goes above 42% the greater their share of the number of MPs. In 2015 the SNP gained 50% of the vote but achieved 56 MPs, which equates to 95% of the representation.

As a rough rule of thumb when the vote share is around 42% the the number of seats returned is also around 42.

Conversely, when a party's vote share drops below 42%, its share of representation drops off just as quickly. In the June 2017 General Election (there might be another one soon) the SNP's share of vote went down 13 points to 36.9% and the seats gained to 35, a loss of  21 MPs compared to the previous election. In the same General Election the Conservatives achieved 28.6% of the vote and 13 MPs, but Labour on 27.1% only got 7 MPs. A drop of 1.5 points between Conservative & Labour made a difference of 6 MPs, dramatic stuff. 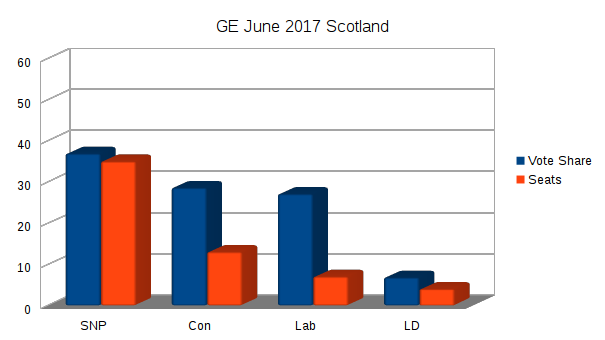 The LibDems, in Scotland, create a little glitch in the theory as they still managed to get 4 MPs on a vote share of just 6.8%, but this is explained by their strategy of targeting a select number of seats. They have a similar approach on a UK wide basis with the same results. In a similar way (for the UK as a whole) the SNP benefits from specialism but theirs is geographical.

Interestingly, if we look at the General Election (June 2017) on a UK wide basis we find that the Tories achieved 42.4% vote share and 317 seats, which is just short of the 325 minimum2 needed for a majority. Their main challengers, Labour, achieved 40.0% of vote share but just 262 seats.This most recent election is quite unusual in UK terms as the first party often only needs about 36%+ to get a majority3.

To win the General Election in Scotland, a party needs a minimum of 30 seats. In this most recent election the SNP achieved 35 seats from a 36.9% share of vote, but that included a few very marginal wins. A slight drop in share of vote could easily lead to the number of seats dropping below the required 30. As the main independence supporting party4 the SNP should aim to capture all of the Yes support which is consistently polling at 45% or more. It is possible that in the 2015 General Election some voters who ordinarily supported other parties decided to "lend" their vote to the SNP as they were caught up in the post-referendum euphoria. Events like the Brexit vote and the Corbyn surge may have cooled that euphoria. Additionally, these events may also have suppressed the enthusiasm of typical SNP supporters6.

The SNP need to start putting plans together now for how they can retain their current seats and possibly re-take some of the recently lost seats, as the next General Election may be just around the corner. A further vote share slippage could be disastrous.