As the dust settles on the 2017 General Election campaign, we find that the most right wing Tory government ever is to be replaced by the same bunch but this time held in place by the Democratic Unionist Party. That is a depressing outcome for anyone wanting to see progressive politics prosper in Scotland, and the UK.

What this all means for the next independence referendum no-one knows for sure. Brexit negotiations haven't started yet and it is likely that Single Market access and the Northern Ireland border will throw up problems for the coalition government. There are already calls from Sinn Féin that a coalition with the DUP is in contravention of the Good Friday Agreement. Another election long before the fixed term concludes isn't inconceivable. However, Theresa "Now is not the time" May teaming up with Northern Ireland's Ultra Unionists won't have improved the chances of getting a Section 30 order in the short-term1. 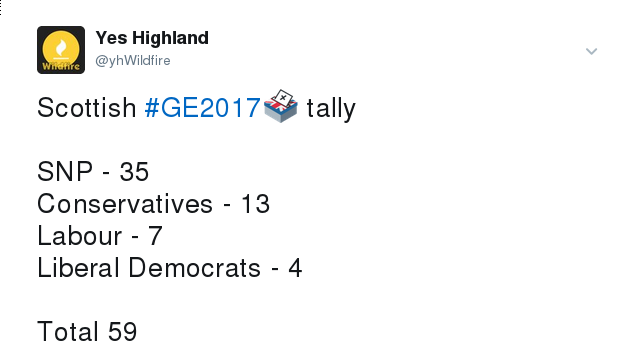 Although the SNP (the only independence supporting party to win any seats) won more than all of the Unionist parties combined, compared to the euphoria of the 2015 election it feels like a loss. The feeling of loss is exacerbated because decent, hard working representatives weren't returned to Westminster. In the Highlands we are lucky to have Ian Blackford and Drew Hendry regain their seats but we also lost Paul Monaghan in Caithness, Sutherland & Easter Ross.

On the national stage we lost former First Minister Alex Salmond and SNP Westminster leader Angus Robertson, two of the big beasts of Scottish & British politics. On a personal note, I was sad to see my former economics lecturer, George Kerevan, didn't get returned in East Lothian. None of these people will be lost to the SNP, or to the independence cause, but their experience and knowledge won't be available on a day-to-day basis in Westminster.

It is to the retention of two seats, by the slimmest of margins, that I would like to mention finally. Pete Wishart was re-elected to Perth & North Perthshire by just twenty-one votes and Stephen Gethins to North East Fife by just two votes. For the avoidance of doubt let me repeat those numbers in numerical form: 21 & 2. Never let it be said that your vote doesn't count or it isn't worth going out in the rain to reach the polling place. Broadcaster Billy Kay made the point that the three votes from his household made the difference between Stephen losing and winning.

These narrow wins are also a testament to the hard work and determination by party activists. In the short term there is little that can be done about huge promotional spend by the London parties or media bias but every lamp-post poster, every door knocked, every GOTV 'phonecall can make the difference between winning and losing.

Activists, we salute you.

1. We note today that the Catalan President, Carles Puigdemont, has called for an independence referendum to be held there on October 1st this year. The Catalans aren't likely to get the equivalent of a Section 30 either.