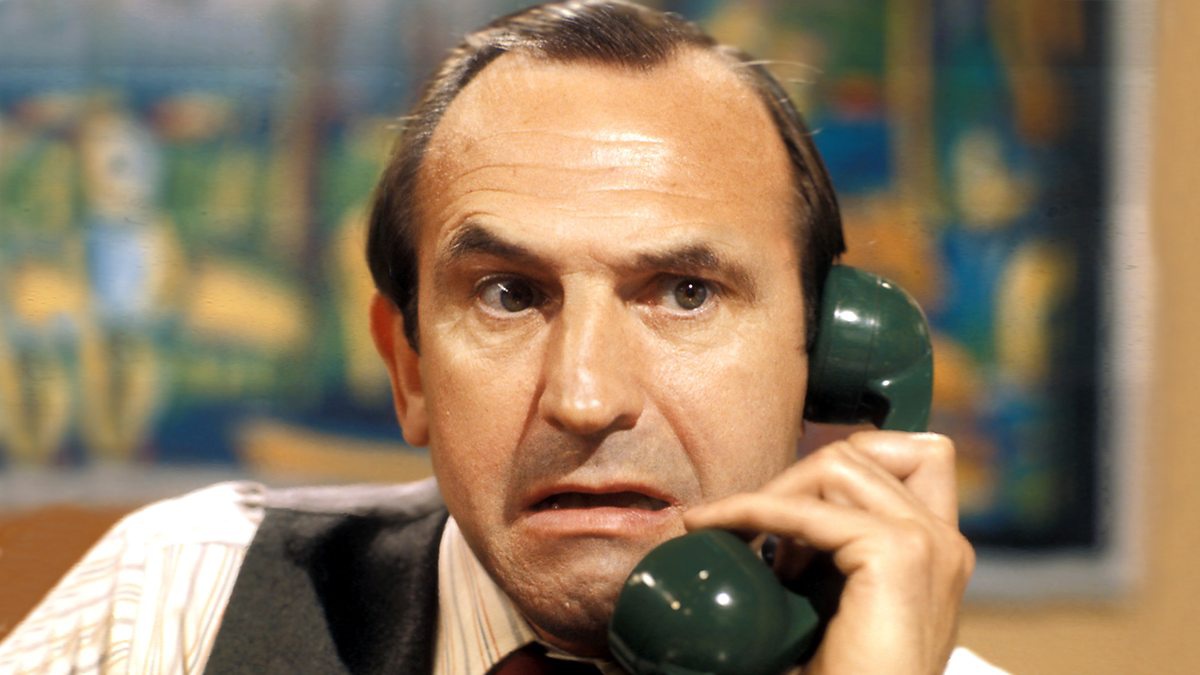 Two things happened on June 23rd, 2016: the UK voted to leave the EU and the campaign for Scottish independence was reinvigorated. One of the foundations of the Better Together campaign in 2014 was that by voting "No" people were guaranteed to stay members of the EU. In the course of one day in June these foundations were completely undermined and the No campaign knew they were in trouble.

The Leave side winning the EU referendum by 52% to 48% was a surprise to many, none more so than former PM David Cameron who promptly announced his resignation. However, it was the scale of the Remain vote in Scotland (at very nearly two-thirds of the vote) in combination with the rUK Leave that set the cat among the unionist pigeons. Scotland would be taken out of the EU against its will and, as has transpired since, also removed from the Single Market, the very definition of a hard Brexit. David Cameron's EU referendum, instigated to plaster over the cracks in his own party, had instead delivered the only likely material change required to hasten a second independence referendum. 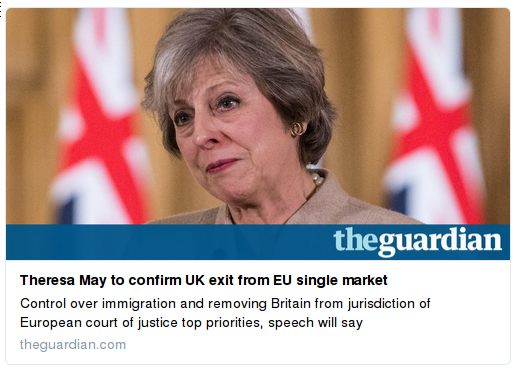 Consistently, in the run up to the 2014 referendum, Better Together played their Project Fear card that an independent Scotland would be dumped out of the trading bloc and spend years trying to get back in. Better Together: the Tory, Labour and LibDem joint venture, may have gone but most of the principal actors are still around and they needed a new campaign meme, and needed it quick. 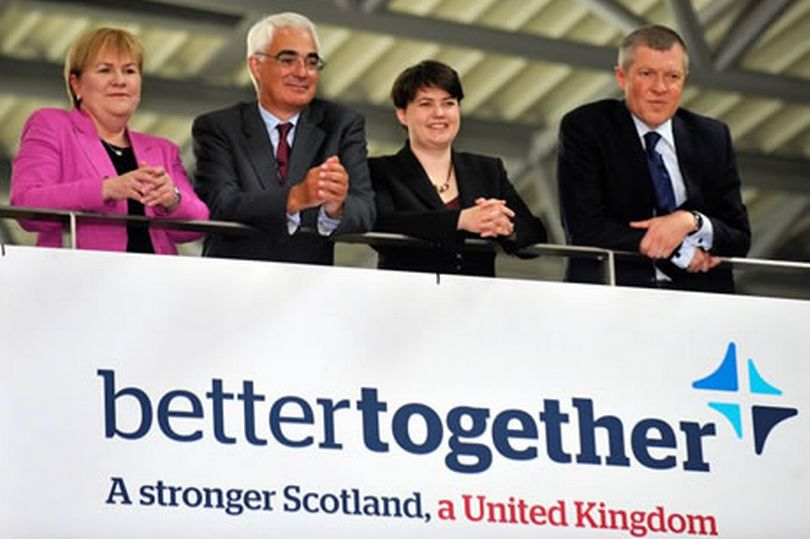 Without an official campaign group the Unionists also required someone to deliver the new meme. Step forward The Scotland Office, the UK government's outpost in Scotland and, although staffed by civil servants, has been used for party political purposes before. The newly devised meme needed to play on an economic fear that leaving the UK would be far worse for Scotland than leaving the EU. Towards the end of 2016 The Scotland Office started Tweeting the graphic, shown below. 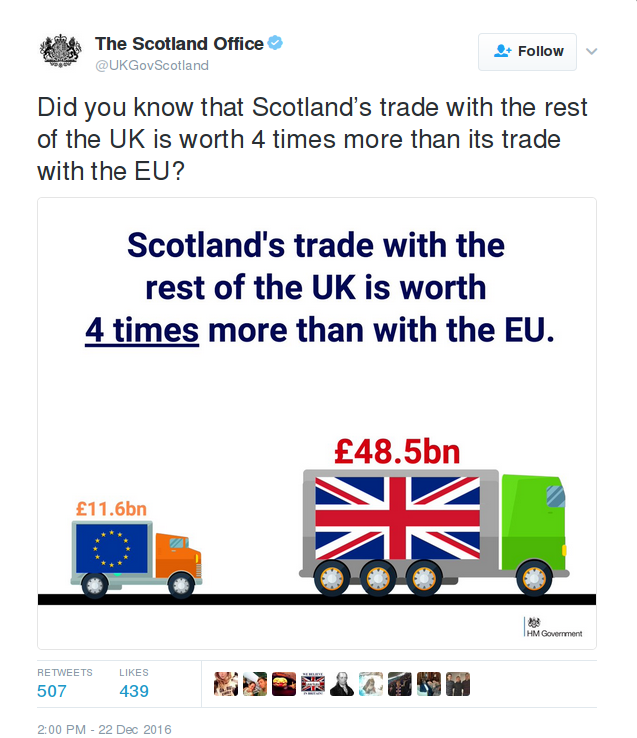 In essence the new No Campaign meme is:

Don't leave us Scotland, look how important our trade is (but if you do think about leaving here is a threat: we'll block your exports).

Let's investigate this new meme and see if there is any substance to it.

Export Statistics Scotland (ESS) is based on the Global Connections Survey, an annual survey run by the Scottish Government, as well as other survey and administrative data sources. It produces estimates of the cash value of exports by destination and industry sector for all sectors of the Scottish economy including the primary, manufacturing and service sectors. This source should be used to obtain estimates of the cash value of exports.

The first thing to note is that the information comes from a survey. The respondents are self-selecting and the information provided is voluntary. The sampled information is then multiplied by the turnover of all companies in the relevant sector. The civil servants will take great care to ensure the methodology makes the data as reliable as possible but the resultant statistics should only be considered as a guide.

There are some more limitations with the statistics which you can read about below1. However, there is one gaping chasm in the Scottish trade figures estimated by ESS, namely the exports do not include oil and gas. Approximately 90% of oil and gas reserves are in Scottish territorial waters and the scale of new discoveries west of Shetland may increase that percentage.

We have established that the statistics should be treated with some caution as they may not be a true reflection of Scottish exports and we know that the oil & and gas exports have been excluded which would further close the gap. However, there will be some truth in the Scotland Office graphic as it is completely normal for adjoining states to trade more with each other. Shared language, cultural similarities and geographical proximity will all help increase trade between neighbours. Of course, this trade goes both ways2. 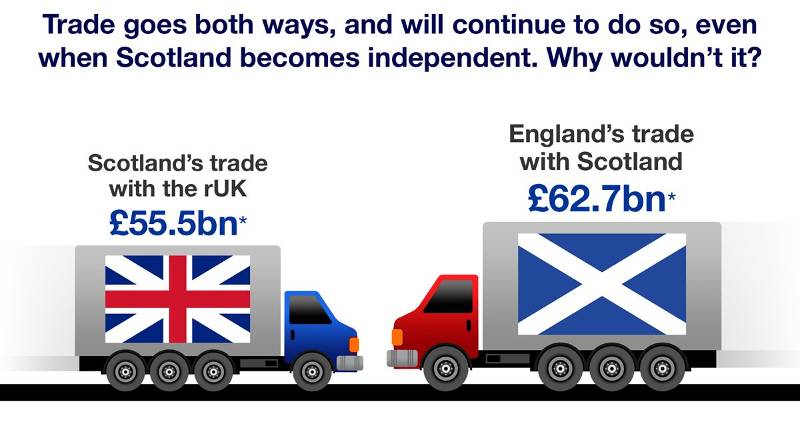 The rest of the UK actually sells more to Scotland than the other way round (figures in graphic above is for England & rUK). It would be an incredible piece of economic self harm for rUK to impose any trade restrictions with Scotland as it would hurt them even more. The Prime Minister, Theresa May, has already been courting the US and Turkey as potential trading partners with the prospect of Article 50 about to be triggered. At the same time her government is trying to make us believe that rUK would impose trading restrictions with their nearest neighbours. It doesn't make sense, and wouldn't happen. 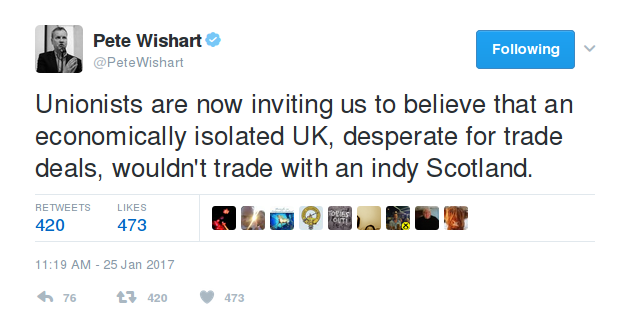 The great thing about a meme is it allows other parties to pick it up and run it with a little customisation to fit their message. In Scotland this means that the media (almost all the press and broadcasters take a pro-Union position) and the political parties can join in. The following graphic was Tweeted by The Labour Party in late January 2017 (Burns' Day to be precise). 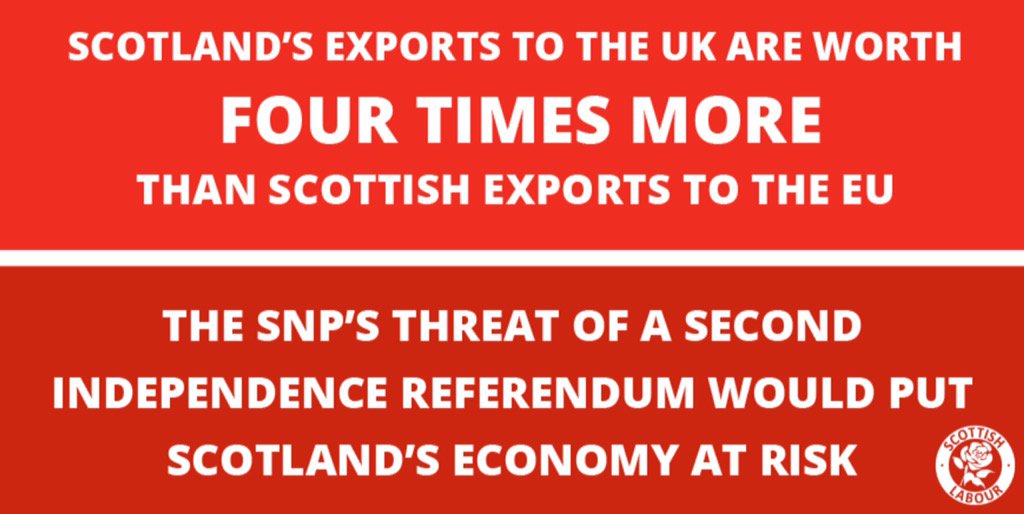 The first rectangle is a repeat of the line from their friends at The Scotland Office. The second line is presumably Labour's own spin which makes absolutely no sense at all. According to Labour just having the option of an independence referendum puts our economy at risk but this is left unexplained. Labour also fail to mention the enormous effect a hard Brexit would have on the Scottish economy directly, and indirectly through the wider rUK economy suffering. Since late January we have learned that Labour are trying to play a two faced game when it comes to Brexit and the triggering of Article 50. In Scotland, Labour are trying to convince us that they are against leaving the EU but the UK leadership, where the real decisions are made, forced their MPs to vote for triggering Article 50 by imposing a three line whip.

The final coup de grâce for the exports meme ironically came from the Scotland Office themselves when they had a follow up graphic trying to reinforce the same message but instead made Scotland's position look even stronger. 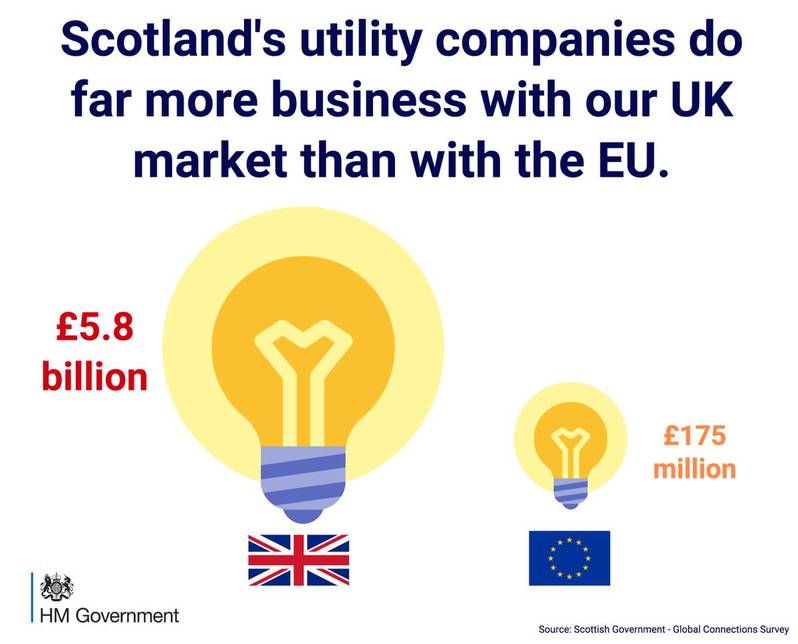 Quite rightly the UK Government are pointing out that Scotland is a net exporter of electricity and the vast majority of it goes to England. Think about it for a second or two and you will realise that if there were to be any restrictions in exports between an independent Scotland and rUK, quite literally, the lights would go out in England. That wouldn't happen, of course, because restrictions in trade between an independent Scotland and the remaining UK wont happen.

As easily discredited as the meme can be we fully expect the UK government, and other supporters of the UK union, to continue with it, in one form or another, because they don't have much else to build a campaign on.

To summarise, the statistics used by the Scotland Office should be treated with some caution particularly as the Scottish exports will have been substantially under-reported. If we treat the statistics as a guide only we still need to recognise that trade goes both ways and the rUK is a big beneficiary of exports to Scotland. As highlighted by The Scotland Office some of our exports, electricity in their second example, are of key importance to the rUK economy and domestic energy requirements. Restrictions on trade between Scotland and rUK will not happen, as it is not in the interests of any of the countries involved.

For these reasons the meme can be logically dismissed but getting the message out to voters is difficult to do if we don't have the same access to them. It is a concern that our media are still happy to uncritically report UK government press releases. In particular, it is disappointing that the broadcast media do this as, unlike the printed press, they still have large audiences. As always it will be down to independence supporting groups and individuals using blogs, websites and social media to help counter these misleading memes.

1. The ESS UK & export trade estimates should be treated with caution for three reasons. Firstly, companies are not obliged under UK law to produce accurate accounting reports below UK level. Without legal enforcement the accounting information provided may not be as accurate and the data may be inconsistent from one company to the net.

Secondly, trade figures to rUK may be masking Scottish exports because complex products may be being completed elsewhere in the UK before being shipped internationally. For example, if a company sells gearboxes to a car manufacturer in England and that car is then exported to Germany only the car sale may get counted towards EU exports, not the gearbox.

Thirdly, it is possible that survey respondents in Scotland may not be aware of final destination of products sold, even for non-complex products, due to the nature of distribution.

2. Graphic courtesy of IndyPosterBoy. Figures differ as they are from 2014 rather than 2015 as used by The Scotland Office.

It would be a great service to the Scottish Nation if a numerate person could be found to go though the top 20 export categories from Scotland and prove the actual break down between rUK and EU is the 50:50 most of us think it is.

@Cadogan
Duty on whisky often gets tallied against England because it is measured at the point where it gets exported, which often is an English port.

You would hope that all of the whisky exports would be allocated to Scotland's books but as explained in Note 1. above these can sometimes fall through the cracks.

It is not possible to apply "common sense" to these things as markets can develop and change rapidly. It is surprising, for instance, to note that Scotland is the largest exporter of that most English of drinks, gin.

The key problem is that the UK government has never had an interest is measuring Scotland's economic performance. In fact, hiding things like the McCrone report shows that they would rather bury such information. An interesting read on this subject is the book "The Claim Of Scotland" which was serialised on Wings:
http://wingsoverscotland.com/to-our-english-brother/

Through the years there have been many numerate people trying to stitch together Scotland's economic performance. John Jappy and Jim & Margaret Cuthbert are names that immediately spring to mind. Regardless of the efforts of these people it is an uphill struggle when the full information isn't available.

I've been looking at -

Am I right in thinking that in terms of exports of Goods and not even including Oil and Gas , Scotland is doing
well ?

An analysis of Scotland's total exports for 2015 has put the figure at nearly £100bn. If goods only exports are selected Scotland will probably look even healthier compared to rUK because we produce lots of stuff and rUK much more dependent on financial services. There has been a slight dip in recent years for our exports to EU. No statistics to back this up but a newly independent pro-European Scotland would be bound to improve our exports to our neighbours.

The UK government used to collect statistics separately for Scotland but stopped doing so, without explanation, in 1921 (need to check that date). Strangely, up until that time the books showed Scotland subsidising rUK.

There is a short article on Business for Scotland re the ESS statistics:
http://www.businessforscotland.com/scotlands-100-billion-of-exports-provide-the-foundation-for-a-wealthy-independent-country/

There is also an article by Margaret Cuthbert which is critical of the lack of proper statistics and governmental approach to the economy:
https://www.commonspace.scot/articles/9162/margaret-cuthbert-what-gers-and-brexit-reports-tell-us-about-scotlands-economy

BTW
I wish the Scottish Government would refrain from quoting our exports minus oil & gas, it is a nonsense. How about quoting rUK exports minus financial services.