Just over a week ago, and prior to the 2017 council elections, I was perusing our Twitter timeline when I noticed the Tweet shown below. 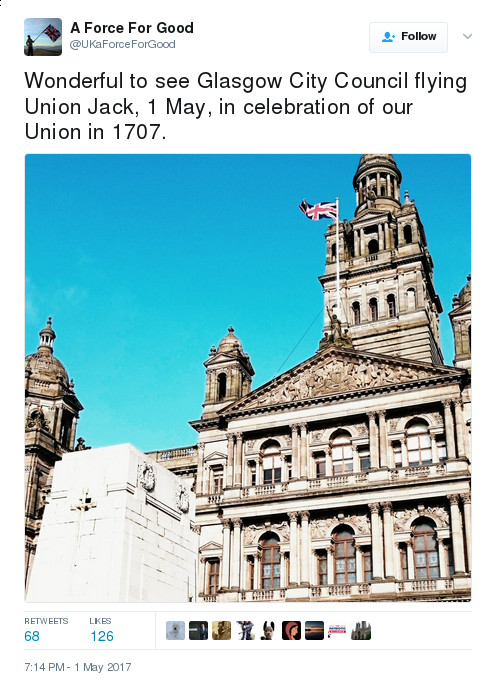 I resisted the urge to post a sarcastic remark but I did have a wry smile to myself that perhaps the Union Jack wouldn't be flying in that position in the future, but didn't give it any further thought at that time.

Fast forward a week or so and we now know the SNP have ousted Labour as the largest party in Glasgow City Council and discussions are on-going about how they can form an administration. So, my wry grin might not have been in vain. Again, by chance I came across a series of Tweets on the subject of the Union Flag and Glasgow city chambers, which ended with this informative post:

I was amazed that there were so many "mandated" days for flying the Union Flag, particularly as I didn't know half these people. Do we really need to celebrate Prince Philip's birthday, whose only talent seems to be going around the world insulting foreign dignitaries? After all, we now have a foreign secretary to perform that role. Interestingly, the date that started this discussion Union Day, on May 1st, isn't one of the days listed. I felt intrigued enough to do some research on this subject.

The list originates from the UK Government Department of Culture, Media & Sport and is intended as guidance specifically for their buildings throughout the UK. In Scotland, this would include the Scotland Office building in Melville Crescent, Edinburgh but does not include buildings used by The Scottish Government or local authorities. The Scottish Government issue their own guidance which includes the same dates but some individuals are listed using their Scottish, rather than English1, titles. Local councils are free to follow or ignore the guidelines. Many local authorities do fly the St. Andrews flag daily on their primary buildings, although there are some notable exceptions, and then change to the Union Flag to mark the days on the DCMS list.

The Union Flag, or Union Jack2, has never been formally recognised as the national flag for the United Kingdom. There was an attempt to formalise the status of the flag with the Union Flag Bill (2008) but it didn't reach the second reading in the House of Commons. The status of the Union Flag has only come about through convention and passage of time.

The first version of the Union Flag was created in 1606, by royal decree, and was to be flown by all shipping belonging to the "Kingdome of Great Britaine" as a means of identification. However, as many of you will know, there was no single kingdom as the crowns were united in a personal union when King James VI of Scots also became King James I of England. The personal union persisted for 104 years until the Union of Parliaments in 1707. However, the Union Flag that we find plastered over everything from driving licenses to boxes of eggs isn't the same one that was introduced over four hundred years ago.

The original Union Flag is shown above left, as commissioned by King James in 1606. However, this design was met with horror and disgust in Scotland as it had the cross of St. George surmounting (sitting on top of) the Saltire. This was, quite rightly, considered an insult to Scotland. Letters were then sent to King James pointing out the insult to Scotland and suggesting alternative designs for the new flag. It is believed the flag shown above right to have been one of the suggested designs. The "Scottish" Union Flag design was rejected by the king but nonetheless was used extensively on Scottish vessels and on many buildings possibly up until 1801.

On January 1st 1801 the Act of Union (1800) came into force and the Kingdom of Ireland was included to form what was to be called (and still is called) the United Kingdom of Great Britain and Ireland. It was decided that this new development required a new Union Flag, so the red and white Saltire of St. Patrick3 was added to the existing design. It is this 1801 flag that we are overly familiar with today. No adjustment to the flag was considered necessary in 1922 when the majority of the island of Ireland reclaimed their independence. Prior to the first Scottish independence referendum there was much debate as to whether the elements of the Saltire should be removed from the Union Flag if Scotland voted Yes. The 1922 decision suggests that the Union Flag might remain the same even after we reclaim our independence.

In comparison Scotland's national flag, the Saltire or St. Andrew's Cross, has a much longer association with the country. The ninth century Pictish King Óengus II led a combined army of Picts and Scots against an invading force and, according to legend, his troops were inspired to victory by the appearance of a white cross against the blue sky. In gratitude King Óengus decided to venerate St. Andrew and from this came the choice of the Saltire as our national flag. An even earlier legend has it that St. Regulus brought relics of St. Andrew to Scotland in the 4th century which led directly to the foundation of the cathedral and town on the Fife coast

In much more recent times the Scottish Parliament's Education, Culture and Sport Committee determined that the Saltire blue should be defined as Pantone 300 (Hex #006CB4) which is a much lighter shade of blue than is often used in print, online or for flags. In earlier centuries there was a preference for darker dyes to be used in seafaring flags as they were more resistant to sun-bleaching. It was for this reason that a much darker navy blue was used for the Saltire's representation in the Union Flag. The model of the Great Michael, shown below, has Saltires which match the modern definition of Saltire blue but in reality the flags were probably much darker. Pantone 300 is much closer to a sky blue than the navy blue used in the Union Flag and this neatly brings us back to the vision seen above the field of battle at Athelstaneford.

I would certainly like to see the Saltire used on all government buildings, whether national or local, as it is the national flag of Scotland. However, there is then the question of how you mark any special occasions if the flag remains the same. An obvious solution, for local authorities, would be to have area flags which are displayed on a daily basis and the Saltire is then used for special occasions. Unfortunately, very few areas have such flags.

I would prefer not to see the Union Flag used as it symbolises a political union which I don't support, and it is inextricably linked to a system of inherited patronage which has no place in modern government. However, I would not, under any circumstances, suggest that the Union Flag should be banned as UKIP have done regarding the EU flag. The Scottish government and local authorities should be free to fly their flag of choice, but those decisions should be guided by the views of people living here.

1. The title Prince of Wales although it sounds Welsh lost any direct connection with the country when their last prince, Llywelyn ap Gruffudd, was killed in battle against Edward I (Longshanks) of England in the 13th century. Since that time it has been used as the title for the heir apparent to the English throne.

2. Jack has become a term applied to the flags used in merchant and navy ships, describing the flag hanging from the jackstaff at the bow of the ship, particularly when moored. It seems likely the name Jack was a derivative of Jacques which is the French version of James. The James in question being King James VI & I, who was also the instigator of the Union Flag.

3. There is little historical evidence of the St. Patrick's Saltire ever being used extensively in Ireland either before or after its incorporation into the Union Flag.